Rock stars, and Bono on Jesus 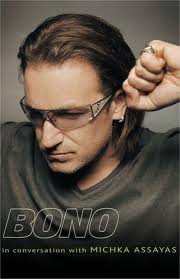 We need rock stars.  All kinds, not only those that can bang out a tune on stage, but that helps too.  Bono is one of my favorite – he is larger than life and unassumingly quiet at the same time.  He just goes about doing what God has given him.  The following article is too good to pass up for the opportunity to re-share, and to keep too.  If you or anyone you have known has ever had doubts or unanswered questions about life and what we’re supposed to do, Bono seems to explain it better than anyone I have heard, and in a way we can all relate.

The New Testament had its rock stars too – John the Baptist, Peter, Paul and many others.  They were radical and went against the norm.  They were not raised in the ivy league temples of the day.  Fisherman, not politicians.  And they changed the world for Jesus.  Yet today, we are much like the Old Testament again.  We are running around in the desert with our golden idols, not knowing quite what to do.  Like the Old Testament Israelites, we too have fallen away from God as a nation in many ways.  And there are periods of intertestamental silence.  Maybe Jesus will be coming again soon.  Maybe it is time for new rock stars to lead the way.  This upcoming generation of youth, The Millennials, no matter what may be said of them, have a power and knowledge that no previous generation has had.  They do not cling to the prior history of prejudice, class warfare, or suppression.  They can lead us out of this desert.. and back to God, if we engage them.

Bono by Michka Assayas
From the Amazon page:

“Bono’s career is unlike any other in rock history. As the lead singer of U2, Bono has sold 130 million albums, won fourteen Grammys, and played numerous sold-out world tours, but he has also lobbied and worked with world leaders from Bill Clinton and George W. Bush to Nelson Mandela on debt relief, AIDS, and other critical global issues. He has collaborated with the same musicians for nearly three decades and has been married to his childhood sweetheart since 1982. His life, at all turns, resists the rock star clichés.

In a series of intimate conversations with his friend Michka Assayas, a music journalist who has been with the band since the very beginning, Bono reflects on his transformation from the extrovert singer of a small Irish post-punk band into one of the most famous individuals in the world; and from an international celebrity to an influential spokesperson for the Third World. He speaks candidly about his faith, family, commitment, influences, service, and passion. Bono: A Self-Portrait in Conversation is the closest we will come, for now, to a memoir from the iconic frontman of U2.”

What follows is an excerpt from the book where Bono talks about Jesus Christ in an interview with the author:

Bono: My understanding of the Scriptures has been made simple by the person of Christ. Christ teaches that God is love. What does that mean? What it means for me: a study of the life of Christ. Love here describes itself as a child born in straw poverty, the most vulnerable situation of all, without honor. I don’t let my religious world get too complicated. I just kind of go: Well, I think I know what God is. God is love, and as much as I respond [sighs] in allowing myself to be transformed by that love and acting in that love, that’s my religion. Where things get complicated for me, is when I try to live this love. Now that’s not so easy.

Michka: What about the God of the Old Testament? He wasn’t so “peace and love”?

Bono: There’s nothing hippie about my picture of Christ. The Gospels paint a picture of a very demanding, sometimes divisive love, but love it is. I accept the Old Testament as more of an action movie: blood, car chases, evacuations, a lot of special effects, seas dividing, mass murder, adultery. The children of God are running amok, wayward. Maybe that’s why they’re so relatable. But the way we would see it, those of us who are trying to figure out our Christian conundrum, is that the God of the Old Testament is like the journey from stern father to friend. When you’re a child, you need clear directions and some strict rules. But with Christ, we have access in a one-to-one relationship, for, as in the Old Testament, it was more one of worship and awe, a vertical relationship. The New Testament, on the other hand, we look across at a Jesus who looks familiar, horizontal. The combination is what makes the Cross.

Michka: Speaking of bloody action movies, we were talking about South and Central America last time. The Jesuit priests arrived there with the gospel in one hand and a rifle in the other.

Bono: I know, I know. Religion can be the enemy of God. It’s often what happens when God, like Elvis, has left the building. [laughs] A list of instructions where there was once conviction; dogma where once people just did it; a congregation led by a man where once they were led by the Holy Spirit. Discipline replacing discipleship. Why are you chuckling?

Michka: I think I am beginning to understand religion because I have started acting and thinking like a father. What do you make of that?

Bono: Yes, I think that’s normal. It’s a mind-blowing concept that the God who created the universe might be looking for company, a real relationship with people, but the thing that keeps me on my knees is the difference between Grace and Karma.

Michka: I haven’t heard you talk about that.

Bono: I really believe we’ve moved out of the realm of Karma into one of Grace.

Michka: Well, that doesn’t make it clearer for me.

Bono: You see, at the center of all religions is the idea of Karma. You know, what you put out comes back to you: an eye for an eye, a tooth for a tooth, or in physics; in physical laws every action is met by an equal or an opposite one. It’s clear to me that Karma is at the very heart of the universe. I’m absolutely sure of it. And yet, along comes this idea called Grace to upend all that “as you reap, so you will sow” stuff. Grace defies reason and logic. Love interrupts, if you like, the consequences of your actions, which in my case is very good news indeed, because I’ve done a lot of stupid stuff.

Bono: That’s between me and God. But I’d be in big trouble if Karma was going to finally be my judge. I’d be in deep s—. It doesn’t excuse my mistakes, but I’m holding out for Grace. I’m holding out that Jesus took my sins onto the Cross, because I know who I am, and I hope I don’t have to depend on my own religiosity.

Michka: The Son of God who takes away the sins of the world. I wish I could believe in that.

Bono: But I love the idea of the Sacrificial Lamb. I love the idea that God says: Look, you cretins, there are certain results to the way we are, to selfishness, and there’s a mortality as part of your very sinful nature, and, let’s face it, you’re not living a very good life, are you? There are consequences to actions. The point of the death of Christ is that Christ took on the sins of the world, so that what we put out did not come back to us, and that our sinful nature does not reap the obvious death. That’s the point. It should keep us humbled . It’s not our own good works that get us through the gates of heaven.

Michka: That’s a great idea, no denying it. Such great hope is wonderful, even though it’s close to lunacy, in my view. Christ has his rank among the world’s great thinkers. But Son of God, isn’t that farfetched?

Bono: No, it’s not farfetched to me. Look, the secular response to the Christ story always goes like this: he was a great prophet, obviously a very interesting guy, had a lot to say along the lines of other great prophets, be they Elijah, Muhammad, Buddha, or Confucius. But actually Christ doesn’t allow you that. He doesn’t let you off that hook. Christ says: No. I’m not saying I’m a teacher, don’t call me teacher. I’m not saying I’m a prophet. I’m saying: “I’m the Messiah.” I’m saying: “I am God incarnate.” And people say: No, no, please, just be a prophet. A prophet, we can take. You’re a bit eccentric. We’ve had John the Baptist eating locusts and wild honey, we can handle that. But don’t mention the “M” word! Because, you know, we’re gonna have to crucify you.

And he goes: No, no. I know you’re expecting me to come back with an army, and set you free from these creeps, but actually I am the Messiah. At this point, everyone starts staring at their shoes, and says: Oh, my God, he’s gonna keep saying this. So what you’re left with is: either Christ was who He said He was the Messiah or a complete nutcase. I mean, we’re talking nutcase on the level of Charles Manson. This man was like some of the people we’ve been talking about earlier. This man was strapping himself to a bomb, and had “King of the Jews” on his head, and, as they were putting him up on the Cross, was going: OK, martyrdom, here we go. Bring on the pain! I can take it. I’m not joking here. The idea that the entire course of civilization for over half of the globe could have its fate changed and turned upside-down by a nutcase, for me, that’s farfetched

If only we could be a bit more like Him, the world would be transformed. When I look at the Cross of Christ, what I see up there is all my s— and everybody else’s. So I ask myself a question a lot of people have asked: Who is this man? And was He who He said He was, or was He just a religious nut? And there it is, and that’s the question. And no one can talk you into it or out of it.