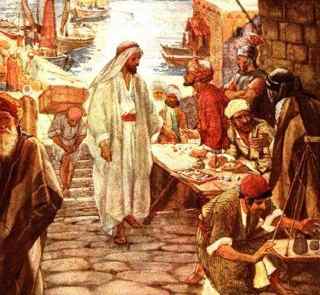 Do you remember that feeling when you got picked for the team in school? It probably made you feel happy or relieved. Or maybe you remember not getting picked, and it seemed to make your whole day feel even worse.  Everyone wants to belong somewhere, to know they have worth. We want to feel, that even though we might not be very good or have made some stupid mistakes, someone believes in us anyway, and likes the potential they see in us. Well, that’s exactly what Jesus did, and how he made people feel.

Jesus was known for dining with sinners and tax collectors. Tax collectors were in a category all by themselves and considered the biggest sinners of all. It would have been scandalous in those days to be seen with them, much less dine at their house. Now, Jesus was not hanging out with them to call out their sins or to prove his point, which he certainly had the authority to do. He was there for one thing: Follow Me! Jesus saw their potential over the bad. He was giving them a chance. They had been picked for the team!

Then Jesus went out again beside the sea. The whole crowd was coming to Him, and He taught them. Then, moving on, He saw Levi the son of Alphaeus sitting at the tax office, and He said to him, “Follow Me!” So he got up and followed Him.

While He was reclining at the table in Levi’s house, many tax collectors and sinners were also guests with Jesus and His disciples, because there were many who were following Him. When the scribes of the Pharisees saw that He was eating with sinners and tax collectors, they asked His disciples, “Why does He eat with tax collectors and sinners?” When Jesus heard this, He told them, “Those who are well don’t need a doctor, but the sick do need one. I didn’t come to call the righteous, but sinners.”

Matthew went on to follow Jesus the rest of his life, giving up his rich lifestyle. He wrote a book about Jesus’s life which became one of the four gospels. He went on to minister to Persia, Macedonia, Syria and Ethiopia to bring the good news to kings and sinners, and he never regretted that day he was picked or his decision to follow.