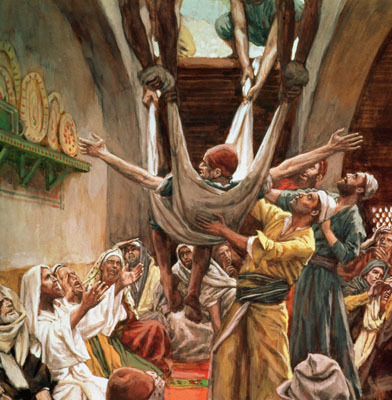 Which is easier – to forgive someone’s sins, or to heal their physical body?  We have medical doctors, medicine and hospitals that can do great things today to heal the body, but we still only have one person who has ever claimed to be able to forgive your sins for eternity, and that is Jesus.  No other person, no matter what religion or belief, has ever even attempted to make that claim.  And that one single claim is the difference, and it’s a big difference.  It’s worth checking out the person who made this claim.

Jesus had no agenda of his own, and did not seek fame on his own.  Everything he did pointed to God, whom He called His Father.  The crowds that followed Him said it all – “We have never seen anything like this!”

I have to insert a little humor here as you read this story.  Imagine Jesus speaking to the crowds, people hanging on his every word, some serious perhaps, and all of a sudden these four guys start cutting into the roof and lowering this guy down into the room. People gasp!  But Jesus stays calm, and maybe he even smiles and laughs a little to himself as he sees what lengths these guys have gone.  Jesus was not put off.  I like to think that Jesus, who was also fully human, takes delight in our persistence and creativity of our faith to see Him.  He enjoyed people.

When Jesus entered Capernaum again after some days, it was reported that He was at home. So many people gathered together that there was no more room, not even in the doorway, and He was speaking the message to them. Then they came to Him bringing a paralytic, carried by four men. Since they were not able to bring him to Jesus because of the crowd, they removed the roof above where He was. And when they had broken through, they lowered the mat on which the paralytic was lying.

Seeing their faith, Jesus told the paralytic, “Son, your sins are forgiven.”

But some of the scribes were sitting there, thinking to themselves: “Why does He speak like this? He’s blaspheming! Who can forgive sins but God alone?”

Right away Jesus understood in His spirit that they were thinking like this within themselves and said to them, “Why are you thinking these things in your hearts? Which is easier: to say to the paralytic, ‘Your sins are forgiven,’ or to say, ‘Get up, pick up your mat, and walk’? But so you may know that the Son of Man has authority on earth to forgive sins,” He told the paralytic, “I tell you: get up, pick up your mat, and go home.”

Immediately he got up, picked up the mat, and went out in front of everyone. As a result, they were all astounded and gave glory to God, saying, “We have never seen anything like this!”

Would you climb through the roof of a crowded room if you knew Jesus could heal you?