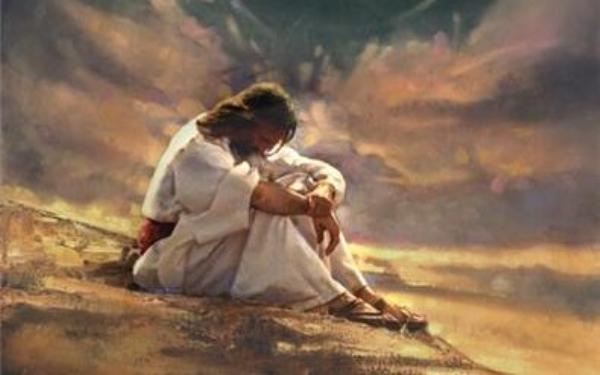 This is one of the most mysterious passages found in the New Testament.  It has been the focus of many questions from both skeptics and scholars.  But it is not my purpose to debate.  I am on a journey; to turn down all the noise and constant distraction from our society, and spend time reading only Jesus’ words from the New Testament to see what He has to say.  “If Jesus is who he said he was, then the only thing that truly matters are His words.”

Jesus’ first recorded conversation in Matthew 3 is with John the Baptist, where He announces his ministry through the act of baptism.  Next, he has a conversation with the devil.

Then Jesus was led up by the Spirit into the wilderness to be tempted by the Devil. After he had fasted forty days and forty nights, He was hungry.  Then the tempter approached Him and said, “If you are the Son of God, tell these stones to become bread.”

But He answered, “It is written: Man shall not live on bread alone, but on every word that comes from the mouth of God.”

Then the Devil took Him to the holy city, had Him stand on the pinnacle of the temple, and said to Him, “If You are the Son of God, throw Yourself down. For it is written: He will give His angels orders concerning you, and they will support you with their hands so that you will not strike your foot against a stone.”

Jesus told him, “It is also written: Do not test the Lord your God.”

Again, the Devil took Him to a very high mountain and showed Him all the kingdoms of the world and their splendor.  And he said to Him, “I will give You all these things if You will fall down and worship me.”

Then Jesus told him, “Go away, Satan! For it is written: Worship the Lord your God, and serve only Him.”

Then the Devil left Him, and immediately angels came and began to serve Him.”

There are a few important facts worth noting from this passage before looking at Jesus’ response.
1. There is a devil, who tempts us and tries to deceive us.
2. There is a Spirit (God) who allows this to happen.
3. The kingdoms of this world belong to Satan, and he wants to be worshiped over God.
4. There are angels to minister to us in time of need.

When Jesus responds to Satan’s attempts, He speaks with authority.  He does not need to prove anything.  Nor does He argue with Satan.  He responds by quoting the Word of God, which Satan cannot dispute.  And, Jesus has the power to tell Satan to leave.

This conversation also tells us about the nature of Satan, through one single word – “if”.
“If you are the Son of God…,” Satan said.  Satan knew exactly who Jesus was and even quoted scripture himself.  But by saying “if”, he was introducing doubt.  Satan tries to make us doubt what we already know.  How many times have we chosen to do something which we knew better?  As Christians, we have the spirit of Jesus within us at all times, and we have the same authority through Jesus Christ to tell Satan to leave. We don’t have to prove anything either.

When Jesus was tempted in the wilderness, at His weakest, alone and hungry, He was able to feel as we feel, and to understand our temptations and struggles.  Through His words, He has given us the way to resist the tempter and his doubts.