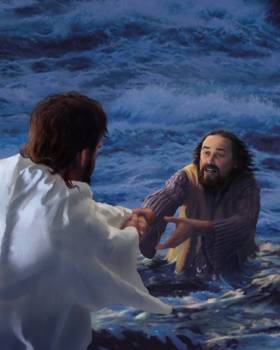 I heard the words so clearly in my mind on that sunny day a couple of years ago.
“Why do you worry, Sue?  I’ve already taken care of it.”  It caught me so off guard that I stopped right there in the middle of my lunchtime run to catch my breath.  With all the noise and traffic around me, I wondered, Who called me by my name?

I had been worrying though.  My company was about to go through more layoffs and change, and even though I would probably be compensated for my many years with the company, I began to worry about the uncertainty.  What should I do.. how will it affect my son’s last year of school.. should I roll over my 401k.. should I take another job?  All of this was running through my mind while I was running that day.  It took my focus away from peace and filled it with unnecessary worry, especially since the decision about my job was not mine to make anyway.

And that’s when I heard this internal voice, gentle but very clear and distinct, say to me in caring way, “Why do you worry, Sue?”  It felt personal.  At that moment I felt Jesus telling me that He knew the details of my situation, and not only was it in His control, it was already taken care of.  The future was already known, so why worry about it.  I picked up my running pace again, looking ahead to the curve in the road where I was about to turn.  I knew that I could not see what was around the corner, but Jesus could and He was already there waiting for me.

I headed back to the office after that, but I no longer worried.  Over the next few weeks, my co-workers noticed a difference.  “Aren’t you worried?” they would sometimes ask.  “No,” I said, “I’m ok with whatever happens.”

Jesus went up on the mountain by Himself to pray. When evening came, He was there alone. The boat with the disciples was already over a mile from land, battered by the waves, because the wind was against them. Around three in the morning, He came toward them walking on the sea. When the disciples saw Him walking on the sea, they were terrified. “It’s a ghost!” they said, and cried out in fear.

Immediately Jesus spoke to them. “Have courage! It is I. Don’t be afraid.”

“Lord, if it’s You,” Peter answered Him, “command me to come to You on the water.”

And climbing out of the boat, Peter started walking on the water and came toward Jesus. But when he saw the strength of the wind, he was afraid. And beginning to sink he cried out, “Lord, save me!”

Immediately Jesus reached out His hand, caught hold of him, and said to him, “You of little faith, why did you doubt?”  When they got into the boat, the wind ceased. Then those in the boat worshiped Him and said, “Truly You are the Son of God!”

I imagine Peter no longer looked at things the same way either after Jesus asked him,“Why do you doubt?”  And as for my job, it was eliminated soon after, but I was rehired in a similar job within the same department.  I was finally able to tell my son a couple of months later (just a few days before the deadline) that I got the new job and wouldn’t be out of work after all.  He seemed surprised.  “I thought you already had the new job,” he said, “you didn’t look worried.”