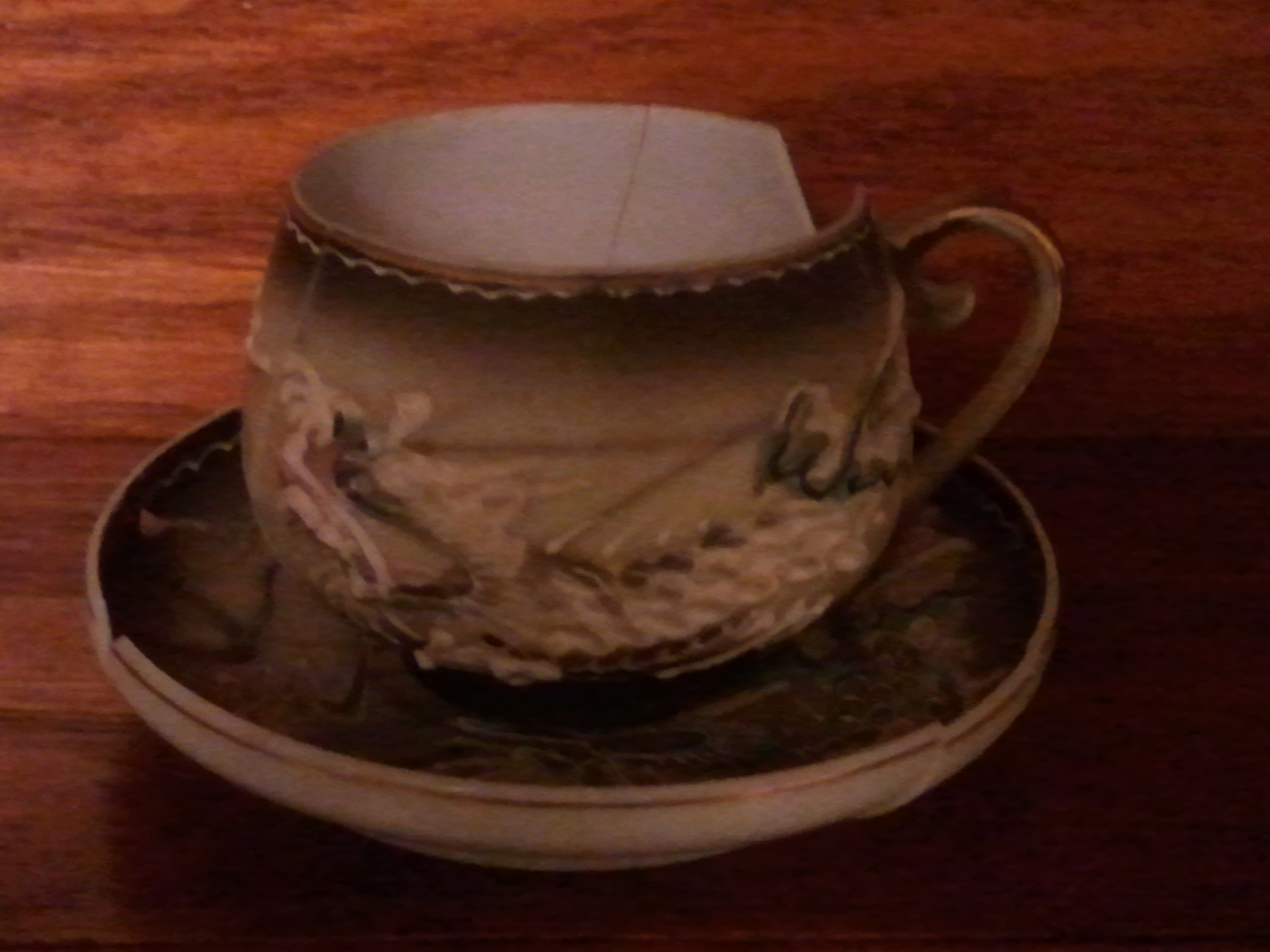 A small, intricate shelf sits just inside the front door of my house.  I call it my teacup shelf.  It is a narrow shelf with five levels, and filled with all sorts of varied teacups I have collected or received over the years.  Some of them are old, some new, some are sentimental, and some are just for fun.  Most of the teacups resemble a familiar English rose pattern found in almost any roadside antique store.  None would seem too priceless, except for maybe one.  And that is where my story begins.

Prominently displayed in the center of the top shelf is a fragile and chipped teacup.  It is not of the normal teacup fanfare.  The light grey cup looks almost translucent when held up to the light.  It is made from a thin bone china and has an Asian-themed dragon carved around the outside of the cup.  Looking inside, there is a 19th century English woman’s face at the bottom of the cup.  I have browsed many antique stores over the years, always searching for a similar type cup, hoping to discover its history and where it came from.  I have never found anything else like it.  The cup has always held a certain mystery to me, ever since it came into my possession as a child.  Its mystery and uniqueness is not only from the design of the teacup itself, but in how I came to own it all those years ago.

“I thought of you when I saw this, so I bought it for you,” my grandfather said to me as child when he handed me the teacup.  I am not exactly sure how he acquired it, but it was probably from one of his many excursions to the flea markets or garage sales.  My grandfather was not a man of many words.  He had a quiet presence, always working in his garden or tinkering with something.  All I remember that day are those simple words he said when he handed me the treasure, “I thought of you when I saw this…”  The teacup was beautiful and unique and very fragile.  I, on the other hand, was a plain-looking nine-year-old girl with curly, frizzy hair, and I did not see anything beautiful or unique about me.  Yet, here I stood holding this magnificent and precious teacup in my hands, which had reminded someone of me.  My mind raced.  I tried to imagine what far-off land it must have come from, and who the mysterious lady was at the bottom of the cup.  It was priceless and valuable in my mind.  It was also very fragile.

Perhaps this is where my fascination for teacups began over the years.  I am grown now and have moved away, and those days from long-ago have mostly been forgotten.  Yet, the teacup moved with me everywhere I went.  It was always displayed on a shelf among all my other belongings.  When I got married, the teacup came with me.  Soon after, when we bought our first house, the teacup moved too.  I was not even aware that it had stayed with me all these years until one day there was an accident.  With all the moves and changes that life can bring, my teacup had been broken.  It shattered into many pieces on the floor.  It did not look like it could ever be restored.  Tears came as I cried and knelt down to carefully scoop up all the pieces.  I am not sure if I was crying over the broken teacup or because I had been so clumsy.  Life was busy at that time, so I gathered up the pieces in a small box and put the box back on the shelf, not knowing what to do with it but not wanting to part with it either.

A few years later when things had settled down a little, I once again took the box off the shelf.  I carefully glued each piece back together, holding one piece at a time until it was set.  It felt good to put it back together, to make it complete again.  A few pieces were missing on the brim of the cup, but I did not mind.  I put the chipped side of the teacup toward the back of the shelf and happily displayed it.  From a distance, the cracks were not too noticeable.  It was only up close that one could see the imperfection.

The teacup is over 30 years old now, at least from the time I have owned it as a young girl.  It is probably the only possession of mine that has been with me almost my entire life.  I even had a special shelf built for it and all the other teacups I have collected since that time.  Each one is beautiful and fragile, and has its own place on the shelf.  Yet in the last few years, things have taken another turn and the contents of the shelf began to change.

Life has become certain, more confident, and a little more weathered.  I am no longer that fragile little girl, and I have a child of my own now.  Since then, a different item has started to gain some space on my teacup shelf.  It all began when my son and I started collecting rocks during one of our adventures together.  We started with a few beautiful crystal rocks from a school field trip.  Next, we added rocks of all colors – blues, greens, pinks, and ambers.  Over time, we collected lava rocks from far-away beaches, and salt rocks from the desert floor.  Each one is unique and beautiful, and yet still as mysteriously made as my dragon teacup from years ago.  But unlike the teacups, the rocks are sturdier and cannot be broken.

I still cling to the fragile teacups at times, but I now have many strong and beautiful rocks to display as well.  The fragile times seem less.  As my son grows, he will have his own challenges in life.  I try to help him find his own strength and confidence, and to reveal the hidden beauty and mystery in life that is not always evident on the surface.

Grandpa, thank you for your kind words to a frightened little girl all those years ago.  We may not always know just how much of an impact our small words and actions can mean to someone, but they can carry us through a lifetime.  My wish is that we will all have our own teacups and rocks to share with others and to keep in our own lives.