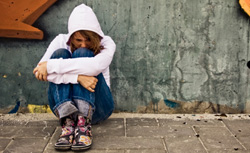 Stories are powerful.  People relate to them easily.  I have found that people remember stories far more than just stating a bunch of facts.  Jesus used this same method, often speaking in parables to the people of his time.  It was about something real in their life.  This is who Jesus was and is.  He cared about people’s needs.  He responded first to their basic human needs before reaching out to their hearts.  Jesus understood.  Even today, it is still the same.

The following story is not a particularly happy story of miracles or hope, but it is that of the basic human need inside all of us.  One may think this could never happen to me, and I hope it never does, but we are all much closer than we think.  One wrong turn, one bad decision in our youth, a childhood beyond our control, could all take us there, could all be us…

I have been traveling the same path for years now, driving south on the interstate into the city, everyday from 9 to 5.  It can be monotonous – the same direction, the same lanes on the highway, the same billboards.  Except for a new building here or there, not much changes in my one-hour commute.  But one day on my regular early-morning drive, I saw something that stood out from the ordinary.  I don’t know his name but he started showing up at the corner of an intersection about five or six years ago.  What made him different from the other homeless people I have seen was his youth.  He looked to be in his early twenties – so young – and if cleaned up a little, could have been quite handsome.  He had a strong, angular face and piercing eyes, and his body appeared strong but thin.  I was driving through the college part of town when I first saw him, and wondered if he had once been a student there and perhaps had lost his way in the world.  Surely someone cares about this young, handsome man, I thought with a whisper of a prayer.

As time went by, I continued to see him every few weeks and always around the same place.  Sometimes he would look happy, almost in a childlike way, and other times he looked like he was barely hanging on.  Over time, I could see the physical deterioration in his face, weathered and beaten beyond his young years, yet a shallow image of his youth was still there.  It tugged on my heart, and I began saying a little prayer for him each time I saw him.  I would search for him on my way home to see if he was ok, just as I would have done for my own son.  Sometimes it would be months in between these visits.  Then he would appear again, and I was never quite sure if I should be relieved at seeing him.  It meant he was still alive, but it also meant he was not being helped.  As a female I knew it was not a good idea for me to get out of my car and help him, so I continued to pray that God would send someone.  After all, he was somebody’s son.  No matter what had happened in his life, there was a moment in time when he came into this world with a mom, bringing all the hope and promise of a new life.  He was once a child like you and I were.

I saw him again the other day after a long lapse.  My commute had changed and I no longer got the chance to check on him as often.  He looks older now, but he still hangs around the same place.  Curiously, there are no homeless shelters in the area where he chooses to walk around, and I have never seen him ask for handouts or carry any bags with him.  Today, I pray that God sends a special angel to comfort him, whatever he may need.  Everybody should have at least one person praying for them.  We are all somebody’s son or daughter.

On this cold and rainy morning, I am grateful for my warm, comfortable home.  I have enough food to eat, my family is safe, and my health is well.  I have no want for anything more.  The only thing that would fill my soul more completely would be to help others to have these very same things.