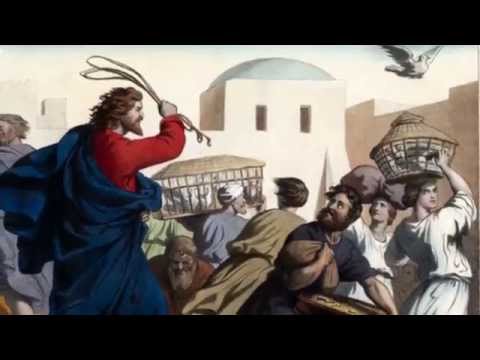 Jesus went into the temple complex and drove out all those buying and selling in the temple. He overturned the money changers’ tables and the chairs of those selling doves. And He said to them, “It is written, My house will be called a house of prayer. But you are making it a den of thieves!”

Until now in the gospel of Matthew, the disciple and author Matthew has shown us Jesus’ magnificent compassion for the people, his miracles and healing, and has given us his great Sermon on the Mount.  But now we come to a more serious Jesus.  He is angry at what is taking place in God’s temple.  The gospel of John also records another similar event in which Jesus “makes a whip out of cords” and uses it to drive out the money changers.  Can you imagine Jesus quietly but deliberately putting together a whip?  This passage brings up many things to think about – the reverence of God’s temple (church), the authority that Jesus showed in carrying out these things, and the thought of God being angry, as demonstrated through His Son Jesus.  I have chosen to discuss the latter one – God’s anger and what does it mean.

Though this was a small demonstration with Jesus, the idea of God’s anger or wrath is perplexing to many, and sometimes uncomfortable.  But if you read the accounts of evil that took place in the Old Testament, you may ask why God has not done more. The enemies of God during that time were so evil that we can barely imagine it today. They cut off their captives hands and feet, gouged their eyes, filleted them and skinned them alive, sacrificed their own children to the gods, and even cut off the heads of children and made their parents wear their children’s heads on a rope around their necks. Unbelievable evil. The prophet Habakuk gives us a glimpse of this in his prayer in Habakuk chapter 1.

Why do You force me to look at injustice?
Why do You tolerate wrongdoing?
Oppression and violence are right in front of me.
Strife is ongoing, and conflict escalates.

Your eyes are too pure to look on evil,
and You cannot tolerate wrongdoing.

The prophet Nahum also sums it up nicely: “The Lord is slow to anger and great in power.” (Nahum 1:3)

First, we must recognize there is a higher power that created us and we are not of our own to do just anything we please in this world.  Ironically, as much as we might like to think we have control of our own destiny, there is so much more out of our control in this world – sickness, death, injustice.

Secondly, God hates evil and the effect it has had on his beloved creation. Evil (or sin) cannot dwell with God.  It is not who He is.  Otherwise God would be less holy and less trustworthy.

Third, God’s Old Testament wrath or anger is meant as a warning to keep us from falling into a deceitful trap which God knows is not the best for us.

Finally, through these warnings, God is drawing us to Jesus so that we may recognize our need for repentance and a Savior, and not have to experience God’s future judgment on sin and evil. This is why the birth of Jesus was such a celebrated celestial event! God’s promise to the world had finally come. Jesus changed the world. We no longer live in Old Testament times. God’s wrath and anger on evil was directed to the cross, where Jesus took our punishment. God wants to redeem us, to forgive us, and to bring us close to Him. But we cannot do that on our own. It is not a system of tallying up our rights and wrongs, or making sure we never make a mistake. That really would be a terrifying and unfair way to live. But instead God has given us a Savior who can fight the evil for us and fight our battles. With Jesus by our side, we never have to be afraid of anything in this world or the next. We are sealed with God forever. We are forgiven no matter what – past, present and future.

While it may seem scary or uncomfortable to think about hell and therefore how we can avoid it, it is much scarier to not think about it at all and leave our lives up to chance.