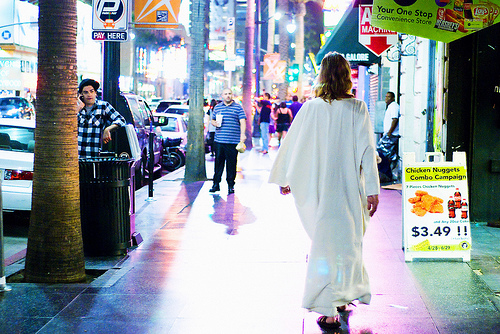 The cost is not what you may think.  It isn’t our behavior or attitude or morals or dress.  And it isn’t our money.  This past week I’ve listened to the news channels argue over who is right and who is wrong when it comes to latest scandals.  I switched the channels back-and-forth on the remote between CNN and Fox, and could not believe the media circus I was seeing played out from either of them.  Both were in a race for ratings and had little to do with the truth itself.  So what is the truth?

Then a teacher of the law came to him and said, “Teacher, I will follow you wherever you go.” Jesus replied, “Foxes have dens and birds have nests, but the Son of Man has no place to lay his head.”  Another disciple said to him, “Lord, first let me go and bury my father.”  But Jesus told him, “Follow me, and let the dead bury their own dead.”

What did Jesus mean when He said, “Follow me“?  Is it to give up your house, abandon your family, join a certain church?  No, he simply meant, “no buts”.

“I will follow Jesus, but just not right now…”
“I believe in Jesus, but I don’t know about all those miracles and being raised from the dead…”

Living for Jesus now, in this moment, in this life, is more important than waiting for a better time or dwelling in the past.  The cost of waiting could be much more.

Suddenly a furious storm came up on the lake, so that the waves swept over the boat. But Jesus was sleeping. The disciples went and woke him, saying, “Lord, save us! We’re going to drown!” He replied, “You of little faith, why are you so afraid?” Then he got up and rebuked the winds and the waves, and it was completely calm.  The men were amazed and asked, “What kind of man is this? Even the winds and the waves obey him!”

When he arrived at the other side in the region of the Gadarenes, two demon-possessed men coming from the tombs met him. They were so violent that no one could pass that way. “What do you want with us, Son of God?” they shouted. “Have you come here to torture us before the appointed time?” Some distance from them a large herd of pigs was feeding. The demons begged Jesus, “If you drive us out, send us into the herd of pigs.” He said to them, “Go!” So they came out and went into the pigs, and the whole herd rushed down the steep bank into the lake and died in the water.

The storms and demons obeyed Jesus when He spoke.  If we really believe Jesus is who he said he was, and believe his actions to be true, then we would want to follow him completely with our lives.  He would be part of our waking up and going to bed, our counsel during the day, our friend and companion, and our Savior.  And it is the  willingness of our hearts and beliefs that Jesus seeks, not certain actions or words.  Other religions require those.  But there are many today who still want to put a price tag on being a Christian – good enough, deserving enough, perfect, act a certain way or do certain things.  The only price is truly believing in who Jesus is and trusting in Him – and that part is free and available to anyone.