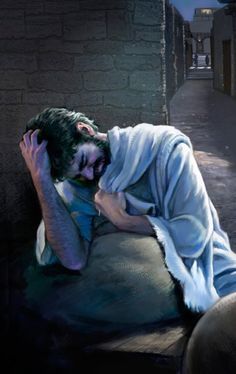 I would bet that each of us have been like Peter at least once in our lives.  Before Peter became the Rock, which was the name Jesus promised him earlier, he was the Denier.  It was probably the lowest point in Peter’s life.  He was in agony over what he had done.  He denied his friend and Lord when Jesus needed him most.  In his mind, he had failed.  Thankfully for all of us, Peter didn’t stay that way.  And neither should we.

As I read this story where Jesus predicts that Peter will deny Him, a few thoughts crossed my mind.

Jesus never stopped loving Peter even as He told Peter what he was about to do, even in His greatest hour of need.  How many times have we failed someone when they needed us?  Jesus understands our human nature and He still loves us.  He can still use us.

Interestingly, after Jesus tells the disciples that they will fall away, He tells them, “after he is resurrected, He will meet them in Galilee.”  Did they not catch that part?  Jesus is telling them He will be resurrected and plans to see them again, but they’re so obsessed over telling Jesus they will never run away from Him that they don’t see the future.  How often are we preoccupied over something we did and miss Jesus’ most important words – words of hope and the future?

Jesus knows knows we all fail from time-to-time.  That is why Jesus came.  We need a Savior – someone who can help us when we can’t help ourselves.  Jesus came to save (future), not condemn (past).  Stop looking back, stop focusing on what went wrong, and look at what Jesus is saying.  He wants to lead you forward, not backward.

Then Jesus said to them, “Tonight all of you will run away because of Me, for it is written:

I will strike the shepherd,
and the sheep of the flock will be scattered.

But after I have been resurrected, I will go ahead of you to Galilee.”

Peter told Him, “Even if everyone runs away because of You, I will never run away!”

“I assure you,” Jesus said to him, “tonight, before the rooster crows, you will deny Me three times!”

“Even if I have to die with You,” Peter told Him, “I will never deny You!” And all the disciples said the same thing.