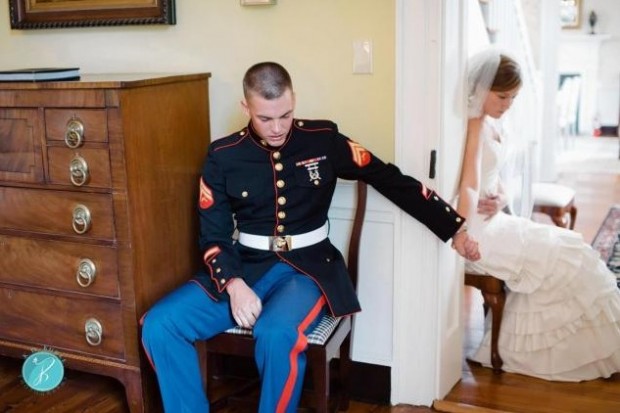 The couple didn’t want to see each other before their wedding, but they wanted to pray together. (Image source: K.D. Burke Photography. Article from The Blaze, June 15, 2013)

Jesus said, “For where two or three are gathered together in My name, I am there among them.”

Wouldn’t you like to have Jesus as a guest at your wedding?  Some people say they don’t believe in organized religion or the control of a church.  Some people prefer to worship Jesus from the privacy of their homes, but are not comfortable attending a church or Bible study.  However, there is something very wonderful that happens when believers come together in prayer, in worship, and in celebration.  It is like an invisible strength.  It is an indescribable power, like a boundary of protection.  To the outside world, it may not look like much, but to the spiritual world, it is the most powerful thing.  Jesus said He is there among you.  And where you have gathered with two or more in His name, God has intervened.  You have fought off more demons than you know.  You have aided in more answered prayers than you know.  You have changed the world.

As difficult as this world may be at times, can you imagine how much worse it would be without our prayers?  Christians may not be feared by man but are feared by demons.

“If your brother sins against you, go and rebuke him in private. If he listens to you, you have won your brother. But if he won’t listen, take one or two more with you, so that by the testimony of two or three witnesses every fact may be established. But if he doesn’t pay attention even to the church, let him be like an unbeliever and a tax collector to you. I assure you: Whatever you bind on earth is already bound in heaven, and whatever you loose on earth is already loosed in heaven.

Again, I assure you: If two of you on earth agree about any matter that you pray for, it will be done for you by My Father in heaven. For where two or three are gathered together in My name, I am there among them.”