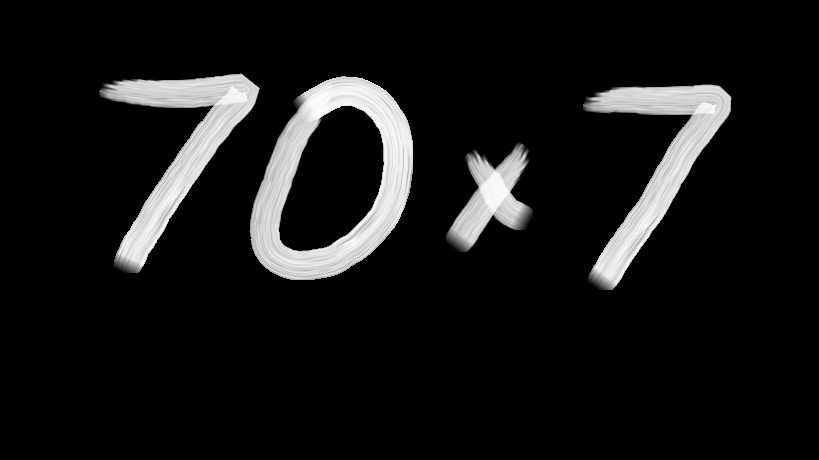 This is a hard one.  When I first started studying and writing about Jesus’ spoken words, my intent was to shut out all the noise and opinions coming from the world and just concentrate for a while on exactly what Jesus had to say.  His recorded words, not anyone else’s.  Most of the time that has been very encouraging, sometimes it speaks close to my heart, and other times like this one, it can be a little hard to swallow.  I kept wanting to add a “yes, but…” to Jesus’ words when reading this next passage.

The Parable of the Unforgiving Slave

Then Peter came to Jesus and said, “Lord, how many times could my brother sin against me and I forgive him? As many as seven times?”

“I tell you, not as many as seven,” Jesus said to him, “but 70 times seven. For this reason, the kingdom of heaven can be compared to a king who wanted to settle accounts with his slaves. When he began to settle accounts, one who owed 10,000 talents was brought before him. Since he had no way to pay it back, his master commanded that he, his wife, his children, and everything he had be sold to pay the debt.

“At this, the slave fell facedown before him and said, ‘Be patient with me, and I will pay you everything!’ Then the master of that slave had compassion, released him, and forgave him the loan.

“But that slave went out and found one of his fellow slaves who owed him 100 denarii. He grabbed him, started choking him, and said, ‘Pay what you owe!’

“At this, his fellow slave fell down and began begging him, ‘Be patient with me, and I will pay you back.’ But he wasn’t willing. On the contrary, he went and threw him into prison until he could pay what was owed. When the other slaves saw what had taken place, they were deeply distressed and went and reported to their master everything that had happened.

“Then, after he had summoned him, his master said to him, ‘You wicked slave! I forgave you all that debt because you begged me. Shouldn’t you also have had mercy on your fellow slave, as I had mercy on you?’ And his master got angry and handed him over to the jailers to be tortured until he could pay everything that was owed. So My heavenly Father will also do to you if each of you does not forgive his brother.

70×7.  Catchy phrase, isn’t it?  I think Jesus knew it would get our attention more than just saying we are to forgive forever.  Not only are we to forgive “70 times 7”, but we are to forgive with our heart.  In other words, we are to mean it.  Sometimes we pretend to forgive the one that wronged us.  We start talking to them again, resume our lives, but it’s not 100%.  We’re still a little mad in our hearts.  Maybe it’s because they didn’t ask to be forgiven or admit they were wrong, or we know they’ll do it again.  But aren’t you glad God did not put any restrictions on our own forgiveness, no matter how many times we fail?  As someone once said, “We want mercy for ourselves and judgement for others.”

God invented forgiveness.  It comes from Him.  Forgiveness is for us, not for the other person.  It means we are free from carrying all that resentment.  We are no longer responsible for the outcome, and through the act of forgiving, we are saying that we trust God to deal with it in His way instead of our own.  Forgiveness brings us closer to God.  How can I go to God with my prayer requests and thankfulness if I am holding a resentment in my heart?  We are to cleanse all of that before we seek God’s presence.

And the best reason… forgive so that we may also be forgiven.  Once we are forgiven, we owe no debt to God.  We are free to start over.  We are clean in God’s eyes.

The last thing I want to do is be hypocritical when I am writing about Jesus, so in full confession, I admit I have a grudge that has been hard for me to forgive.  I have carried this burden for a couple of years now, and although it is a minor offense, it can drive wedges.

My prayer today to my heavenly Father, and every day going forward, even if it takes me 70 X 7 days, is that I can completely forgive the grudge in my heart.  I am asking God to help me forgive.  And perhaps when I do that, others I know who have been affected will also be able to forgive. Who knows where this could lead?  I’ll never know if I continue to stay in the same place I am today.

Author’s note: I held on to this posting for a couple of days while I sought to forgive.  I can honestly say I feel a lightness and optimism in my heart that I didn’t have a few days ago.  It feels good.  It is a daily journey, but God promises us that it will be worth it.