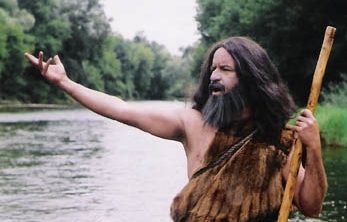 Jesus is recorded as saying, “the least in the kingdom of heaven will be greater than John the Baptist, who was the greatest person ever born of a woman.”

That is quite a statement.  Jesus made some bold statements in his time, recorded in the New Testament.  They were things no one else would claim or dare to say.  If we focus our attention on these bold,  direct statements Jesus said instead of the little details we sometimes squabble over, our priorities might just change.  So what did Jesus mean by his statement on John the Baptist?

The kingdom of heaven is a big deal!  The honor of being accepted as a child of God who inherits the kingdom of heaven is greater than anything else we can possibly imagine or do on our own.  Even the least, most insignificant life here on earth can be greater than the person who was chosen to prepare the way for the Son of  God. Heaven is not to be missed for anything!

Something greater was happening.  Up until the time of John the Baptist, there was no Savior or Messiah, and prayer and contact with God only came through a high priest.  People had to atone for their sins through regular sacrifices.  But now, Jesus came as a personal Savior to the world for anyone who wanted it.  Christianity was born.  No matter what a person may have done (even the least) they will be considered greater than John the Baptist in heaven, because they accepted God’s Son, Jesus Christ!

When John heard in prison what the Messiah was doing, he sent a message by his disciples and asked Him, “Are You the One who is to come, or should we expect someone else?”

Jesus replied to them, “Go and report to John what you hear and see: the blind see, the lame walk, those with skin diseases are healed, the deaf hear, the dead are raised, and the poor are told the good news. And if anyone is not offended because of Me, he is blessed.”

Look, I am sending My messenger ahead of You;
he will prepare Your way before You.

I assure you: Among those born of women no one greater than John the Baptist has appeared, but the least in the kingdom of heaven is greater than he. From the days of John the Baptist until now, the kingdom of heaven has been suffering violence, and the violent have been seizing it by force. For all the prophets and the Law prophesied until John; if you’re willing to accept it, he is the Elijah who is to come. Anyone who has ears should listen!”

No other person or prophet – Mohammed, Moses, or anyone else – has ever had anyone who came before them to announce and authenticate their arrival.  Jesus had many witnesses and many prophecies.  No one can dispute what he claimed to have said and done.  They can only refuse to accept it.