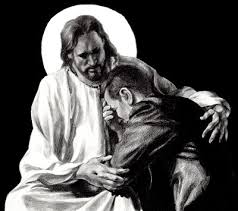 Jesus said, “I desire mercy and not sacrifice. For the Son of Man is Lord of the Sabbath.” (Matthew 12:7-8)

Sacrifice is what we do for ourselves.

Mercy is what we do for others.

Sacrifice is what we do to save ourselves.

Mercy requires someone else to save us.

Sacrifice is about us.

Mercy is about Jesus.

I saw a woman being interviewed on television this week, in response to the Chattanooga shootings in her hometown.  When she spoke, her expression was kind, not angry, and her voice was calm but with a pleading sadness to it.  It caught my attention as I looked up from my work.

“We need to learn to love people,” she said.

It sounded as if Jesus was speaking through her.

At that time Jesus passed through the grainfields on the Sabbath. His disciples were hungry and began to pick and eat some heads of grain. But when the Pharisees saw it, they said to Him, “Look, Your disciples are doing what is not lawful to do on the Sabbath!”

He said to them, “Haven’t you read what David did when he and those who were with him were hungry—how he entered the house of God, and they ate the sacred bread, which is not lawful for him or for those with him to eat, but only for the priests?  Or haven’t you read in the Law that on Sabbath days the priests in the temple violate the Sabbath and are innocent?  But I tell you that something greater than the temple is here!  If you had known what this means: I desire mercy and not sacrifice you would not have condemned the innocent.  For the Son of Man is Lord of the Sabbath.”

Moving on from there, He entered their synagogue. There He saw a man who had a paralyzed hand. And in order to accuse Him they asked Him, “Is it lawful to heal on the Sabbath?”

But He said to them, “What man among you, if he had a sheep that fell into a pit on the Sabbath, wouldn’t take hold of it and lift it out? A man is worth far more than a sheep, so it is lawful to do what is good on the Sabbath.” Then He told the man, “Stretch out your hand.” So he stretched it out, and it was restored, as good as the other.  But the Pharisees went out and plotted against Him, how they might destroy Him.