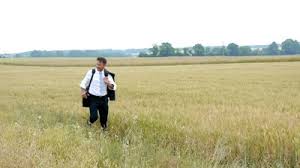 Jesus could have easily been talking about the fair-weathered or pretend Christians of today when he was telling the parable of the Wheat and Weeds.  Hardly a week goes by where we do not hear the surprising and shocking news of someone who is not the person they had pretended to be.  Jesus never asked us to be perfect (for He is the only perfect one), but he did ask us to be authentic.

It reminds me of a time earlier this summer when I attended a small seaside church near the beach.  The sights and sounds of the ocean always bring to my mind images of Jesus’ ministry – the fisherman disciples, their boats and fishing nets, shipwrecks and storms, and Jesus cooking breakfast on the beach for his disciples.  So as I sat in church on that Sunday morning, listening to the music and pondering my thoughts, I saw a man walk in late just as the music had finished and the preaching started.  The man shuffled his way through the row of people and took the empty seat next to me.  He was nicely dressed – perhaps a little too nice for a seaside church where sandals are more the norm; and he smelled nice too – of expensive cologne and wearing an impressive watch.  As the preacher began his sermon, the man opened his Bible, took out his notebook and fancy pen, and shouted a few loud “Amen’s” here and there, nodding to the preacher.  I saw that he wrote down the title of the sermon in his notebook, while saying a few more “Amen’s”.  I was impressed for a few minutes.  But then he never wrote another word in his notebook.  At the end of the sermon, when the music started back and the preacher gave an invitation for anyone who wanted to follow Jesus, the man packed up his things, climbed over all the people again, and left.

I don’t think Jesus was impressed with his show.  Jesus would rather see someone come to the church in their wrinkled and disheveled clothes, worn out from the stresses and burdens this world can sometimes bring, falling down on their knees, pouring out their heart to Jesus and asking for His help.  Authentic and Repentful.

The reason some people were angry with Jesus during his ministry on earth and chose not to follow him was because Jesus was not impressed with their wealth or status.  How aggravating that must have been for them!

Jesus used ordinary people – fisherman, tent-makers, tax collectors and sinners, a prostitute, and a murderer (Paul) – and He made them extraordinary.  Now that is impressive.

On that day Jesus went out of the house and was sitting by the sea. Such large crowds gathered around Him that He got into a boat and sat down, while the whole crowd stood on the shore.

He presented another parable to them: “The kingdom of heaven may be compared to a man who sowed good seed in his field. But while people were sleeping, his enemy came, sowed weeds among the wheat, and left. When the plants sprouted and produced grain, then the weeds also appeared. The landowner’s slaves came to him and said, ‘Master, didn’t you sow good seed in your field? Then where did the weeds come from?’ ‘An enemy did this!’ he told them. ‘So, do you want us to go and gather them up?’ the slaves asked him.

‘No,’ he said. ‘When you gather up the weeds, you might also uproot the wheat with them. Let both grow together until the harvest. At harvest time I’ll tell the reapers: Gather the weeds first and tie them in bundles to burn them, but store the wheat in my barn.’”