Pray for Our World: Hungary 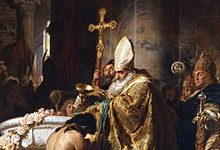 Pray for Our World: Hungary

Hungary has adjusted well from a socialist economy to a market economy, though the older generation struggles a little more to go from a system that cared for their needs to one which they mostly look after themselves.  Hungary is a country rich in history and Christian history as well.  In the year 2000, they celebrated 1000 years since their conversion to Christianity.  Originally Hungary was a Roman province in 8 AD, and there were Christian communities there as early as the 3rd century.  The first Hungarian translation of the Bible was prepared in the 1430’s by Hussite preachers.  Roman Catholicism came to Hungary and they helped administered schools and hospitals.  Later came Reformed (Calvinist), Evangelical (Lutheran), Orthodox, and Unitarian (first created in the 1850’s in Transylvania).

Around the year 1000, Vajik became the first King of Hungary after defeating his pagan opponent, and was baptised (pictured in the famous painting above) and assumed the name Stephen after his baptism.  Around this time, missionaries also came from several different areas to Hungary.  One of King Stephen’s first laws was that everyone should go to church.  His second law was that every ten villages together should build a church.

Hungary has contributed significantly to the arts, sciences, and literature over the ages, from middle ages, reformation, papal history, enlightenment, and the Austro-Hungarian empire.  In 1949, Hungary became communist, modeled after Stalin in the Soviet Union.  Religious instruction was abolished, monasteries were dissolved and almost 4,000 monks and nuns were deported, imprisoned or tortured.  Fifty years later, communism disappeared, and the government passed the Law of Freedom of Conscience and Religion which established the freedom of religion as a basic human right and that church activities were useful to society.

May Hungary continue to acknowledge their Christian importance in the world and keep their freedom of religion.